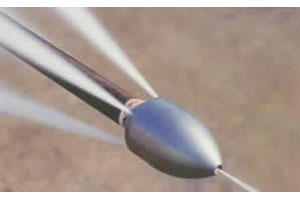 Pipe descaling may require different cleaning systems and equipment, specifically for Vertical & Horizontal piping. Cast iron piping in a high-rise is not cleaned the same way the clay piping in the front yard of a residential home in Florida.

Buildup must be removed of and disposed of properly. Debris cannot be left latent in the piping system because it will cause a blockage. Scale build-up on the inside of pipe is already heavier than water, so it will settle again. On large projects or long lengths of piping, Blue Works uses a vacuum to properly remove material.

Hydro-Jetting is also often referred to as drain-jetting and is highly effective in heavily clogged and obstructed pipes and drains. The typical “cabling and sewer snake method for clearing pipes merely creates a small hole in the clog, and should only be used to remove foreign objects and infrequent blockages. Hydro-Jetting is how you really clean out clogged pipes!

If your pipes are being snaked more than 1x / year, we suggest a camera inspection ASAP, as the problem might be bigger than you think.

Hydro-jetting by Blue Works, on the other hand, completely clears the entire pipe system.

Have important questions about your plumbing? We have solutions!